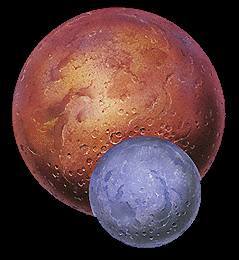 An artist rendition of the Pluto Charon system. Formerly a planetary system, now just dwarf planets. Note that because Charon is massive, the center of mass is outside Pluto.
In the last general assembly of the international astronomical union, astronomers voted to demote planet Pluto, to strip it of its planetary status. The reasons for the reduced status are clear. (And it was coming for a long while!) The surprising bit, however, was the definition the particular astronomers concocted, eh, came up with. They were looking for a precise definition, and indeed found one, one which is precisely wrong. According to it, Earth is not a planet either!

For a long while, the only known objects beyond the orbit of Neptune were Pluto and long period comets. Obviously, a clear distinction existed and Pluto could be without a problem defined as a planet, albeit one which is different from the outer four giant gas planets.

As more Kuiper belt objects were discovered it became progressively clearer that the 2000 km in diameter Pluto is simply the largest Kuiper belt object, just as much as the 1000 km Ceres is the largest Asteroid belt object. Namely, it is clear that Pluto and Ceres are the largest in a spectrum of objects that extend to smaller masses and not the lightest of similar but more massive objects. Thus, it was apparent at this stage that these objects, which are smaller than our moon, should not be classified as planets but as planetoids (or "dwarf planets", if you like Snow White). Historically however, Ceres was discovered together with other asteroids, so it was never classified as a planet while Pluto was discovered by itself and thus classified as a planet.

As long as Pluto was the largest Kuiper belt object, the distinction between planet and planetoid (or dwarf planet) could be kept such that Pluto remained a planet. Anything larger than pluto and orbiting around the sun is a planet. Anything else, isn't.

This continued to be the situation even once relatively large Kuiper belt objects were discovered, including Sedna and Quaoar which are somewhat smaller than Pluto. Placing a distinction between Pluto and these objects was already pushing it, but still legitimate. This has changed with the discovery of Xena.

The recent discovery of 2003 UB313 (nicknamed Xena) changed all that. Why? Because it is larger than Pluto! If Pluto is a planet, so is Xena. With Xena in the game, it was clear that either there are only eight planets, or there are more. How much more is not clear since some arbitrary lower mass cutoff would determine which object is and which isn't a planet.

Personally, having grown up on the idea that there are 9 planets of which Pluto is the last, I must admit that downgrading our solar system to only 8 planets would seem rather strange. As apparent from above, however, it is the reasonable thing to do. Pluto, Xena, Ceres etc, are simply the largest of a set containing many smaller objects. If they are planets, then all the smaller objects should be too, at least down to a reasonable cutoff. One possibility is the mass above which the self gravity of the object is large enough to force it to be round (this takes place for objects larger than a few hundred kilometers). Under this definition, the solar system has dozens of planets, including long known asteroids such as Ceres. Since we don't think of Ceres as a planet, we shouldn't of Pluto either. 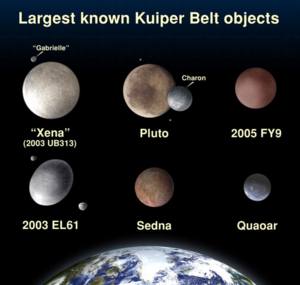 The largest Trans-Neptunian objects. Are they planets or are they not? If so, where is the cutoff?
The IAU astronomers followed the same logic and thus tried to formulate a proper definition of a planet. Instead, they came up with a concocted definition under which Pluto is indeed not a planet, but neither is Earth for that matter.

According to the IAU, the definition of a planet is an object which The first three points are clear enough, ensuring that moons and stars are not planets. The last point however is strange. Under this definition Pluto is definitely not a planet as it didn't clear out much the larger Neptune from its orbit (the orbit of Pluto is very elliptic and thus crosses that of Neptune). However, did Earth clear out it's orbit? There are about 10,000 Earth crossing asteroids after all (e.g., nicely photographed Eros)! We didn't clear them up, we're not a planet then! On the same token, Neptune didn't clear up Pluto from its orbit, so Neptune is not a planet either. Actually, even Jupiter's orbit is not clear of planetary debris. Perhaps it cleared out much of its orbit, but it can also trap asteroids in it. So even Jupiter is not a planet according to this definition.

Xena on the other hand, is in a very distant neighborhood which is relatively clean of known objects (it was probably scattered to this orbit, and there is probably significantly more debris over there, but we don't know that for sure), so perhaps Xena according to this definition is a planet, it even has its own moon (Pluto incidentally has 3). Clearly the new definition of a planet is, well, a bad one.

A much better definition for a planet would be any object which The last point ensures that Kuiper belt or asteroid belt objects, such as Pluto or Ceres will not be considered as planets, but Earth will not be demoted because the mass of the Earth crossing asteroids is small. This point essentially quantifies whether an object "dominates" its neighborhood or not. Note that far away Xena might be a planet according to this definition.

Evidently, there are a few reasonable definitions for a planet (but none which is significantly better than the rest), however, the definition chosen by the IAU is not even reasonable.