Does the global temperature lag CO2? More flaws in the Shakun et al. paper in Nature.

Does the global temperature lag CO2? More flaws in the Shakun et al. paper in Nature.

By shaviv 19 Comments
Blog topic:
global warming, weather & climate
Over the past two weeks, perhaps a dozen people asked me about the recently published paper of Shakun et al. in Nature. It allegedly demonstrates that the global temperature followed CO2 around the warming associated with the last interglacial warming, between 20 to 10 thousand years ago. (Incidentally, if you don't have a subscription to nature, take a look here). One guy even sent the story as a news item on NPR. So, having no other choice, I decided to actually read the paper and find what is it all about. Should I abandon all that I advocated over the past decade?

First some prologue. One of the annoying facts for alarmists is that ice cores with a sufficiently high resolution generally show that CO2 variations lag temperature variations by typically several hundred years. Thus, the ice cores cannot be used to quantify how large is the effect that CO2 has on the climate. In fact, there is no single time scale whatsoever over which CO2 variations can be shown to be the origin of temperature variations (not that such an effect shouldn’t be present, but because of its size, no fingerprint was actually found yet, even if you hear otherwise!). This fact stands as a nasty thorn in the alarmist story. So, it is no surprise that when Nature recently published that (finally) there is an observation showing that the temperature (and in particular, the average global temperature) lags CO2, that the alarmist community had a field day over it.

The abstract specifically writes (my emphasis):

These observations, together with transient global climate model simulations, support the conclusion that an antiphased hemispheric temperature response to ocean circulation changes superimposed on globally in-phase warming driven by increasing CO2 concentrations is an explanation for much of the temperature change at the end of the most recent ice age.

So, is there a catch?

It turns out that there are several problems with the Shakun et al. analysis. Some have already been pointed by other people (e.g., this, or that). I will concentrate on two new problems that particularly offended my intelligence.

First point: Lags, what do they mean?

I usually start “reading” an article by studying the figures, this way I am not distracted by the interpretation of the authors. And, one of the first things I noticed over this first glance was that indeed the global temperature appears to lag the CO2 variations, however, if you look at each hemisphere separately, it appears that the northern hemisphere lags the CO2 by 720±330 years, but the Southern hemisphere temperature leads the CO2 variations by 620±660 years. The same figure also reveals that the global temperature lags the CO2 by 460±340 years, which is the main find of the paper. Here are these graph (and the original caption). 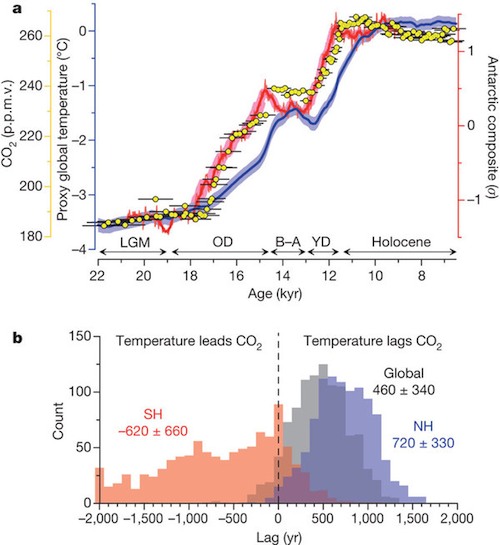 a. The global proxy temperature stack (blue) as deviations from the early Holocene (11.5–6.5 kyr ago) mean, an Antarctic ice-core composite temperature record42 (red), and atmospheric CO2 concentration (refs 12, 13 [in the nature paper, n.s.]; yellow dots). The Holocene, Younger Dryas (YD), Bølling–Allerød (B–A), Oldest Dryas (OD) and Last Glacial Maximum (LGM) intervals are indicated. Error bars, 1σ (Methods); p.p.m.v., parts per million by volume. b, The phasing of CO2 concentration and temperature for the global (grey), Northern Hemisphere (NH; blue) and Southern Hemisphere (SH; red) proxy stacks based on lag correlations from 20–10 kyr ago in 1,000 Monte Carlo simulations (Methods). The mean and 1σ of the histograms are given. CO2 concentration leads the global temperature stack in 90% of the simulations and lags it in 6%.

But what do the lags mean? First, it is clear from causality arguments that CO2 is probably affected by the temperature of the southern hemisphere. I write "probably" and not "definitely", because from a logical point of view, we cannot rule out that some other thing affects both the SH temperature and the CO2 with a larger lag. Nevertheless, this relation is actually quite reasonable given that the ocean temperature affects the equilibrium between carbon present in the oceans and CO2 in the air. Since there is way more water volume in the southern oceans than there is in the northern hemisphere, it is clear that the CO2 should be more sensitive to variations in the southern hemisphere than to variations in the northern hemisphere.

However, the fact that the northern hemisphere temperature lags the CO2 does not imply that the NH is actually affected by the CO2. Compare the following:

How can you differentiate between the two options? You can't! This means that the above result means nothing in particular, except as mentioned before, that CO2 is probably affected by temperature, in particular, that of the southern hemisphere. In defense of the authors, I must say that when they have written in the abstract "an explanation" and not "the explanation" (see quote above), they were accurately portraying the indecisiveness of their results...

Given the fact that the global temperature is composed of the SH and NH and that one precedes and the other lags the CO2, is there any meaning to averaging the two? Perhaps not if the physical behavior is different (at least for the particular temporal window studied in their paper). Even so, one would imagine that such an average for the global temperature should be half of the NH and half of the SH. This is because, at least last that I checked, exactly half of the Earth's surface area is in the Northern hemisphere and half is in the southern hemisphere (unlike comparison of the land area, or the temperature proxy data in the Shakun et al. paper).

My suspicion is that the authors have a different averaging weight to the two hemispheres because of the asymmetry in their data distribution, however, their global temperature is close to but not exactly the ratio in the number of datasets in each hemisphere, so I don't actually know what they did.

Together with the faults pointed out by other people (most notably on WUWT), the Shakun et al. paper should not be considered as anything which proves that CO2 has a large effect on climate. My prophesy, though, is that the Shakun et al. paper will become a major hallmark in the next IPCC scientific report. This is because the alarmist community needs it badly as evidence that CO2 has a large effect of climate. They will also ignore all the major flaws which exist in it, because it will be convenient for them to do so. I hope I'm wrong, but I feel I'm right, and not only because one of the co-authors on the paper is also a lead author of the upcoming IPCC AR5 report.

How much of the warming since the last ice-age should be attributed to CO2?

Since this is a science blog after all, I thought it would be appropriate to end this post with more solid science in it.

Overall, there was a 3.5°C degree increase taking place concurrently to a CO2 increase from 180 to 280 ppm. If the warming is entirely due to CO2, then the climate sensitivity should be ΔTx2 ~ 3.5°C/log2(280/180), or about 5.5°C per CO2 doubling. But as I explained above, this conclusions is not supported at all by the above correlation. However, it does imply that if anyone is calculating a probability distribution function for the temperature sensitivity to CO2, then they should cut it at 5.5°C, because it simply cannot be any larger than that.

On the other hand, my best estimate for the climate sensitivity, is that CO2 doubling should cause a 1 to 1.5°C temperature increase, or about 0.65 to 1°C for a 180 to 280 increase in the CO2. In other words, at most a quarter of the observed 3.5°C should have been caused by the CO2 feedback. The rest is something else.