By shaviv 24 Comments
Blog topic:
astronomy, cosmic rays, weather & climate
After a long embargo, results from the Danish National Space Center (DNSC) Sky experiment were finally published in the Proceedings of the Royal Society. These results will probably we overshadowed with today's announcement of this years' physics nobel prize winner (for the COBE microwave background experiment), but they are very important nonetheless.

This is the Royal Society's press release on the publication of Svensmark et al.:

“Using a box of air in a Copenhagen lab, physicists trace the growth of clusters of molecules of the kind that build cloud condensation nuclei. These are specks of sulphuric acid on which cloud droplets form. High-energy particles driven through the laboratory ceiling by exploded stars far away in the Galaxy - the cosmic rays - liberate electrons in the air, which help the molecular clusters to form much faster than atmospheric scientists have predicted. That may explain the link proposed by members of the Danish team, between cosmic rays, cloudiness and climate change.”
You can also find more about it in the Danish National Space Center press release 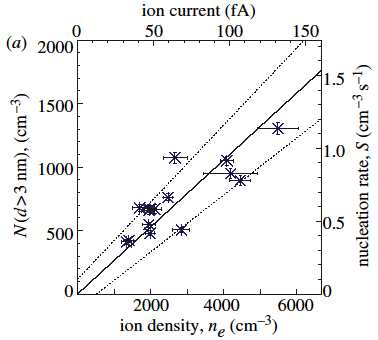 Results from the Danish National Space Center SKY reaction chamber experiment: Condensation nuclei density as a function of ion density, under steady state with the environmental conditions (including SO2 at 155 p.p.t, H20 at 35% RH and H2SO4 at 108cm-3). Evidently, more ionization implies more particle nucleation. 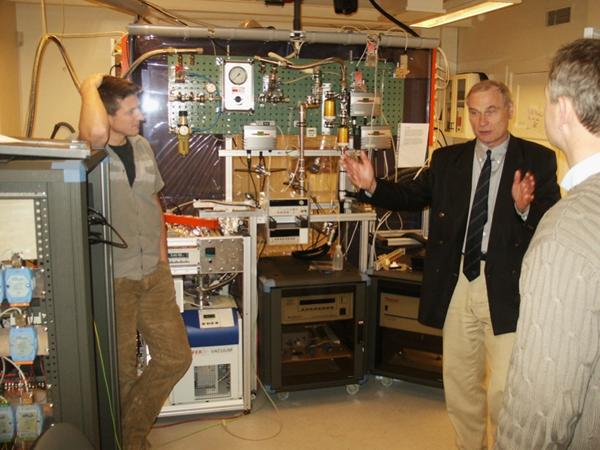 The Danish National Space Center SKY reaction chamber experiment. The experiment was built with the goal of pinning down the microphysics behind the cosmic ray/cloud cover link found through various empirical correlations - and it was successful! From left to right: Nigel Marsh, Jan Veizer, Henrik Svensmark. Behind the camera: the author.
What do these results imply? For a long while, evidence pointing out towards a Cosmic Ray → Cloud Cover → Temperature link has been accumulating. (e.g., see this short review). The evidence was clear enough to convince many (such as your humble servant) that the Cosmic ray climate link is the only reasonable explanation for the plethora of data. However, a big thorn was the lack of physical evidence for the physical mechanism, which until now was only speculated. Until now that is.

This link implies that a large fraction of the 20th century global warming can be explained through increased solar activity (which reduced the cosmic ray flux reaching Earth). More about that can be found in this discussion, or in this paper.

Kudos for Henrik Svensmark and his group!