I should also add that I was quite shocked to see how the audience was so one sided (though far less than the ridiculous 97:3 ratio we hear about!) and unwilling to listen to scientific arguments. I am actually quite lucky to be living in Israel where free speech and free thought are really more than lip service. Having honest debates in Israeli academia or in the media is actually the norm.

Below you will find the summary I wrote myself before the debate. Since it is rather concise I thought it would be a good idea to bring it here as well.

Let me begin by asking you a question. What is the evidence that people, like the proponents here, use to prove that we humans are responsible for global warming and that future warming will be catastrophic if we don’t get our act together?

The fact is that this idea is a misconception and the so called evidence we constantly hear is simply based on fallacious arguments.

To begin with, any one who appeals to authority or to a majority to substantiate his or her claim is proving nothing. Science is not a democracy and the fact that many believe one thing does not make them right. If people have good arguments to convince you, let them use the scientific arguments, not logical fallacies. Repeating it ad nauseam does not make it right!

Other irrelevant arguments may appear scientific, but they are not. Evidence for warming is not evidence for warming by humans. Seeing a poor polar bear floating on an iceberg does not mean that humans caused warming. (Actually, the bear population is now probably at its highest in modern times!). The same goes to receding glaciers. Sure, there was warming and glaciers are receding, but the logical leap that this warming is because of humans is simply an unsubstantiated claim, even more so when considering that you can find Roman remains under receded glaciers in the Alps or Viking graves in thawed permafrost in Greenland.

Other fallacious arguments include using qualitative arguments and the appeal to gut feelings. The fact that humanity is approaching 10 billion people does not prove that we caused a 0.8°C temperature increase. We could have just as much caused an 8°C increase or an 0.08°C. If all of humanity spits into the ocean, will sea level rise appreciably?

In fact, there is no single piece of evidence that proves that a given amount of CO2 increase should cause a large increase in temperature. You may say, “just a second, we saw Al Gore’s movie, in which he presented a clear correlation between CO2 and temperature from Antarctic ice cores”. Well, what he didn’t tell you is that one generally sees in the ice cores that CO2 lags the temperature by typically a few hundred years, not vice versa! The simple truth is that Al Gore simply showed us how the amount of CO2 dissolved as carbonic acid in the oceans changes with temperature. As a matter of fact, over geological time scales, there were huge variations in the CO2  (a factor of 10) and they have no correlation whatsoever with the temperature. 450 million years ago there was 10 times as much CO2 in the atmosphere but more extensive glaciations.

When you throw away the chaff of all the fallacious arguments and try to distill the climate science advocated by the IPCC and alike, you find that there are actually two arguments which appear as legitimate scientific arguments, but unfortunately don’t hold water. Actually, fortunately! The first is that the warming over the 20th century is unprecedented, and if so, it must be human. This is the whole point of the hockey so extensively featured in the third assessment report of the IPCC in 2001. However if you would google “climategate” you would find that this is a result of shady scientific analysis - the tree ring data showing that there was little temperature variation over the past millennium showed a decline after 1960, so, they cut it off and stitched thermometer data. The simple truth is that in the height of the middle ages it was probably just as warm as the latter half of the 20th century. You can even see it directly with temperature measurements in boreholes. 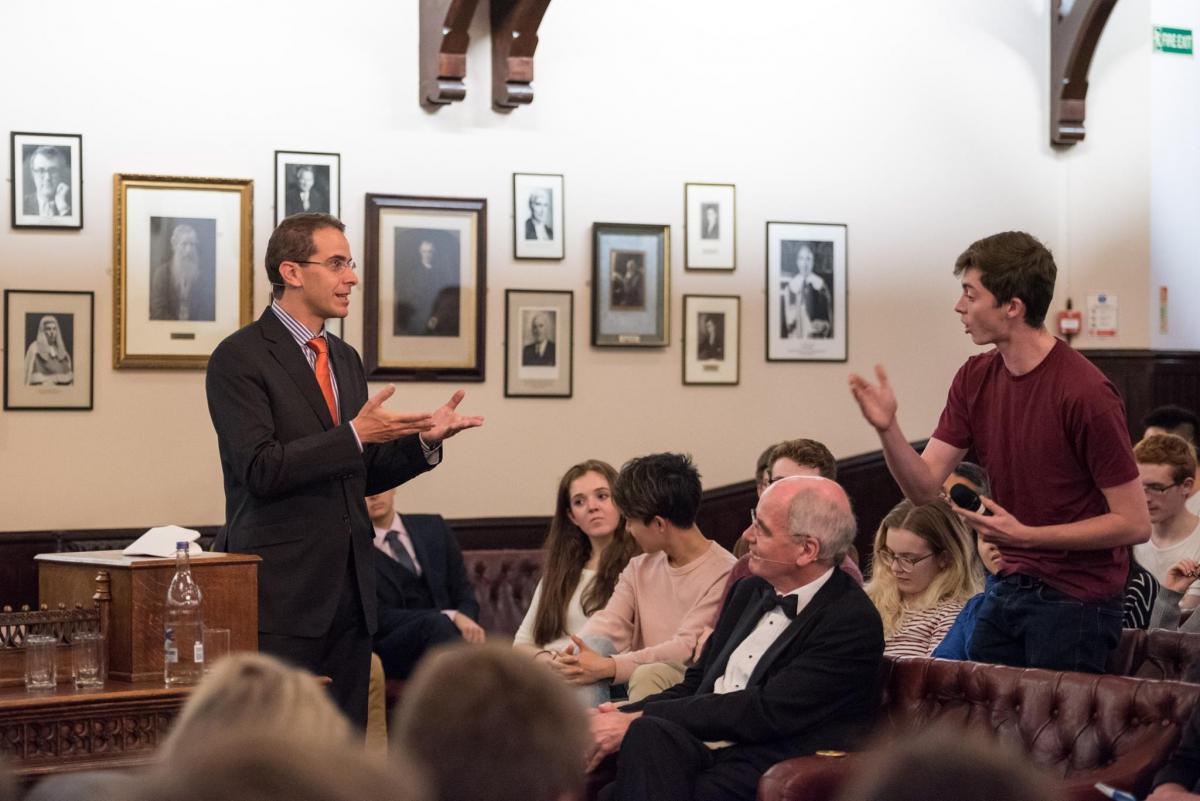 Before explaining why the sun completely overturns the way we should see global warming and climate change in general. It is worth while to say a few words on climate sensitivity and why it is impossible to predict ab initio the anthropogenic contribution.

The most important question in climate science is climate sensitivity, by how much will the average global temperature increase if you say double the amount of CO2. Oddly enough, the range quoted by the IPCC, which is 1.5 to 4.5°C per CO2 doubling was set, are you ready for this, in a federal committee in 1979! (Google the Charney report). All the IPCC scientific reports from 1990 to 2013 state that the range is the same. The only exception is the penultimate report which stated it is 2 to 4.5. The reason they returned to the 1.5 to 4.5 range is because there was virtually no global warming since 2000 (the so called “hiatus”), which is embarrassingly inconsistent with a large climate sensitivity. What’s more embarrassing is that over almost 4 decades of research and billions of dollars (and pounds) invested in climate research we don’t know the answer to the most important question any better? This is simply amazing I think.

The body of evidence however clearly shows that the climate sensitivity is on the low side, about 1 to 1.5 degree increase per CO2 doubling. People in the climate community are scratching their heads trying to understand the so called hiatus in the warming. Where is the heat hiding? While in reality it simply points to a low sensitivity. The “missing” heat has actually escaped Earth already! If you look at the average global response to large volcanic eruptions, from Krakatoa to Pinatubo, you would see that the global temperature decreased by only about 0.1°C while the hypersensitive climate models give 0.3 to 0.5°C, not seen in reality. Over geological time scales, the lack of correlation between CO2 and temperature places a clear upper limit of a 1.5°C per CO2 doubling sensitivity. Last, once we take the solar contribution into account, a much more consistent picture for the 20th century climate changes arises, one in which the climate drivers (humans AND solar) are notably larger, and the sensitivity notably smaller.

So, how do we know that the sun has a large effect on climate? If you search on google images “oceans as a calorimeter”, you would find one of the most important graphs to the understanding of climate change which is simply ignored by the IPCC and alarmists. You can see that over more than 80 years of tide gauge records there is an extremely clear correlation between solar activity and sea level rise - active sun, the oceans rise. Inactive sun - the oceans fall. On short time scales it is predominantly heat going to the oceans and thermal expansion of the water. This can then be used to quantify the radiative forcing of the sun, and see that it is about 10 times larger than what the IPCC is willing to admit is there. They only take into account changes in the irradiance, while this (and other such data) unequivocally demonstrate that there is an amplifying mechanism linking solar activity and climate.

The details of this mechanism are extremely interesting. I can tell you that it is related to the ions in the atmosphere which are governed by solar activity and in fact, there are three microphysical mechanisms linking these ions to the nucleation and growth of cloud condensation nuclei. Basically, when the sun is more active, we have less clouds that are generally less white.

So, the main conclusion is that climate is not sensitive to changes in the radiative forcing.

This means that we are not required to “cool the economy” in order to cool earth. In Paris and Copenhagen the leaders of the world said that we should make sure that the total global warming will be less than 2°C. It will be less than 2°C even if we do nothing. There are several red flags that people do their best to ignore. The lack of warming in the past 2 decades is a clear sign that sensitivity is low, but people ignore it.

Last point. People say that we should at least curb the emissions as a precautionary step. However, resources are not infinite. Most people in developed nations can pay twice for their energy, but for third world nations? It would mean more expensive food, hunger and poverty, and many in the developed world actually freezing in winter. So in fact, taking unnecessary precautionary steps when we know they are unnecessary is immoral. It is even committing statistical murder.

Now the really last point, I am also optimist that humanity will switch to alternative energy sources in less than 2-3 decades just because they will become cheap enough, and just for the reason that people want to save money. Just like the price of computers has plummeted exponentially (Moore’s law— number of transistors doubles every 18 months) so does the cost of energy from photovoltaic cells (cost halves every 10 years). Once they will be really cost effective, without subsidies, suddenly we won’t be burning fossil fuels because it would be the expensive thing to do!

Let us use our limited resources to treat real problems.