A short history of Mechanics

The first to seriously ponder about the nature of nature where the ancient Greeks. However, following the Aristotlian views, logic was more important than experiment. Since it is logical that heavier bodies fall faster to the ground, it necessarily is the case. For example, an object which is twice as massive as another will reach the ground in half the time. This faulty perception (as did many others) continued for many centuries.

Modern scientific revolution began in the latter half of the 16th century. The first major cracks in aristotlian "status quo", came with Nicolaus Copernucus who chalanged Aristo's geocentric view by placing the sun at the "center". His ideas were publiched in 1543.

Using Tycho Brahe's superb planetary observations, Kepler then improved Copernicus' picture and derived his famous planetary laws of motion. These were published in 1609. 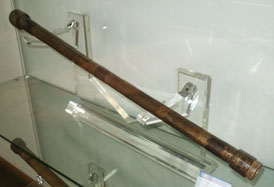 Instruments of Revolutions: Galileo's telescope (at the Florence museum of the history of science). The discovery of craters on the moon and the four large moons of Jupiter demonstrated that the heavens are non perfect and that they too are subject to natural law.
Later, Galileo who is the forefather of experimental physics and astronomy, began experimenting and taking astronomical observations. He found that the Heavens are not as perfect as previously beleived (e.g, by noticing craters on the moon, or other moons orbiting Jupiter) and he could also quantify for the first time simple mechanical results, such that the velocity of a ball rolling down an incline increases in proportion to the square root of time or that objects of different masses fall at the same speed.

Other contemporary contributions to the scientific revolution are those of the "science philosephers" Sir Francis Bacon and Giordano Bruno. Bacon's scientific philosiphy is the basis for modern scientific methodology. Namely, drawing knowledge from the natural world through experimentation, observation, and testing of hypotheses. His contemporary Bruno, is the first to suggest that even the sun is not at the center of the universe, that other stars are like the sun and they too may have life harboring planets. For this and other herecies, he was burned at the stake in 1600.

The greatest theoretical breakthrough was acheived of course with Sir Isaac Newton. He formulated three basic laws of motion to describe both earthly and celestial objects, pubished in his famous "hilosophiae Naturalis Principia Mathematica" in 1687 (aka "Principia" for short). Along the way, he also invented the calculus required to use these laws. Incidentally, the notation we use today follows the independent derivation by Leibniz, not the one by Newton.

Over more than a century following the Newtonian formulation, the notion of energy slowly evolved. First steps towards the understanding of kinetic energy were already done by Leibniz, in the late 17th century, but it took many more decades of thought and experiment by several people to realize that total energy, which includes mechanical, potential and thermal, is conserved. This equivalent between mechanical work and heat was independantly concluded by Julius Robert von Mayer and James Prescott Joule, around 1843. A few years later, the idea was generalized by Hermann von Helmholtz.

In 1786, Lagrange published his formulation for mechanics. Unlike the Newtonian formalism, Largranges' did not include the notion of force, but instead was based on the minimization of action, related to kinetic and potential energies. Using the formalism, many problems which seems hopelessly complicated in the Newtonian formalism become surprisingly simple.

A few decades later, in 1833, Hamilton published his a yet another reformulation of classical mechanics. It too avoids using the somewhat problematic notion of forces. In the 20th century, this formalism was the basis for the development of quantum mechanics.

‹ A few words on the course up Units and Dimensions ›