Snow at above freezing temperatures

Snow at above freezing temperatures 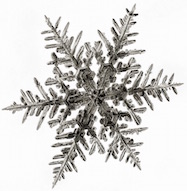 Did you ever wonder how can it snow at above freezing temperatures? Well, the naive explanation is that it simply takes time for the snowflakes to melt once they penetrate above freezing air, as they descend downwards to the ground. This, of course, is the reason why hail can fall in warm weather. Simply, hail stones fall fast, too fast to let the warm air melt the hail. This is not the main explanation, however, for why it can snow when it is above freezing.

From the figure below, it is apparent that there is a clear dependency on the humidity - the drier it is, the warmer can it be while snowing. This implies that the main factor, at least in dry conditions, has to do with humidity. And this factor is evaporation. More specifically, as the snowflakes descend, they evaporate. This process takes heat and keeps the flakes cold.

Thus, if we wish to calculate the maximum temperature, we need to estimate to net heat balance of the flake. First, as the flakes travel in a warm environment, they gain heat from the surrounding through conduction. Second, heat is used to evaporate the flakes, thereby cooling them. If the evaporation heat "sink" is larger than the heat conduction, the flakes will remain frozen.

It turns out that this can be easily calculated. No, it is not simple to calculate the heat conduction or the evaporation heat, but the ratio is, since various unknown geometrical factors cancel out.

If you don't care about the calculation (because you're not a science freak), you can simply visit the calculator page.

If you do care, here is the derivation. Suppose the flow around the flakes is such that a boundary layer of width d forms around it. The total heat flow $F_H$ to the flake (e.g., J/sec in MKS) will be given by Fourier's law:

$$ F_H \approx {\kappa \over c} A {\Delta T \over d}, $$
where $\kappa$ is the heat diffusion coefficient of air (e.g., m²/sec in MKS), c is the heat capacity of air (J/kg in MKS), A is the surface area of the boundary layer around the flake, while ΔT is the temperature difference between the flake and the environment.

Similarly, one can use Fick's law to obtain the diffusion of water vapor from the flake (where the temperature is near freezing, and the relative humidity is 100%), to the surrounding environment, where the temperature is higher and the relative humidity lower:
$$ \Phi_W \approx D A {\Delta \rho_W \over d}. $$
Here, D is the water diffusion coefficient (e.g., m²/sec in MKS) and ρ is the water vapor density (kg/m3 in MKS).

The evaporating ice requires heat, thus, if there is a water vapor mass flux of Φ from the flake, it would require heat at a rate of $F_w = \epsilon \Phi$ where $\epsilon$ is the heat of vaporization of ice (J/kg in MKS).

The highest temperature above which the snowflake melts, is the temperature for which the two heat flows are the equal:
$$ F_w = F_H ~~\rightarrow ~~ \epsilon D \Delta {\rho_w \over d} A = {\kappa A \over c} {\Delta T_{max} \over d}.$$
Note that the geometry of the flow around the flake cancels out, because both heat fluxes depend on d and A in the same way. This would be the case also if the boundary layer around the flake is complex such that d actually depends on the direction. Hence,
$$ \Delta T_{max} = c \epsilon {D \over \kappa} \Delta \rho = c \epsilon {D \over \kappa} \Delta (\rho_{sat} RH). $$
where $\rho_{sat}$ is the saturation water vapor density.

Plugging in the numbers (which can be found for example in the CRC handbook of chemistry and physics), results with an implicit equation for the temperature because the saturation water vapor density depends on the temperature as well. We can simplify things if we instead ask what is the relative humidity required to keep the flake frozen at a given temperature. It is:
$$ RH = 9.5 \exp \left(- 17.27 T_C \over T_C + 238.3^\circ \right) \left( 10.5^\circ\mathrm{C} - T_C\right) \% . $$
where $T_C$ is the temperature in degree Celsius.

This function can be seen in the figure below, together with data from Matsuo and Sasyo, 1981. As can be seen from the figure, the calculated graph is roughly the lower limit below which there is no rain whatsoever. At warmer temperatures, there is a mix. Up to about 1°C above the no melting line, there is mostly snow whereas between about 1°C and 2°C above the line, it is mostly rain, but snow is possible. These events could be due to additional effects, such as strong downdrafts, time it takes to melt the snow, etc. 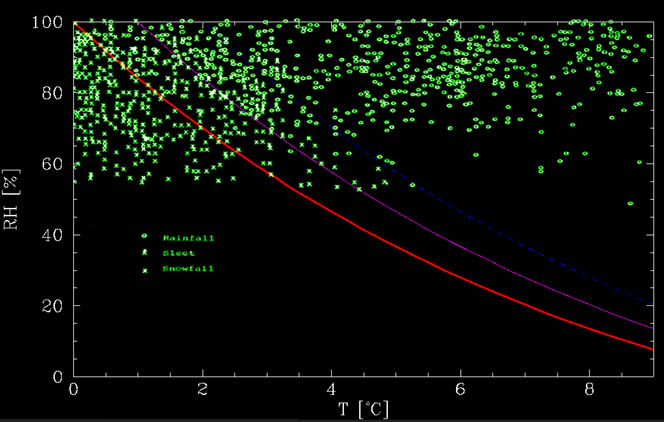 Snow or rain? The red line is the no-melting line. Below it, snow flakes cool by evaporation more than they heat from the environment, thereby keeping themselves frozen. The magneta and blue lines are +1°C and +2°C above the no melting lines. Between 0°C and +1°C above the no melt line, it mostly snows whereas it mostly rains between +1°C and +2°C above the no melt line. At warmer temperatures, it rains. The green data points are events collected by Matsuo and Sasyo (1981) in Wajima Japan, between 1975 and 1978.
Thus, if we wish to observe warm weather snow, very dry conditions are required. For example, if the ground humidity is only about 20% (very rare, because if there is precipitation, the atmosphere is generally wet!) then it could snow at 8°C (or 46°F for English users).

Another requirement is that nowhere along the descend does the air surpass the no melt line. If it does, the flake will of course melt.

If the temperature does rise above freezing, there is there are no parameters with which the type of precipitation can be determined for certainty. All that we can then predict is the probability that snow will actually fall. This can be done using the results of Häggmark and Ivarsson (1997), only corrected to use the frozen-bulb and not the wet-bulb temperature.

The bottom line is a calculator with which the probability of snow can be estimated.