Why don't I believe the that neutrinos travel faster than the speed of light?

Why don't I believe the that neutrinos travel faster than the speed of light?

By shaviv 4 Comments
Blog topic:
general physics, general science
Three weeks ago I visited the underground laboratory of Gran Sasso near l'Aquila. Little did I know that it would make headline news so soon, for "discovering" particles moving faster than the speed of light. Since a few people asked me what did I think of it, I decided to write something about it here.

Before I get into the details, here's a recap of the news item.

The OPERA experiment was built to detect 17 GeV or so neutrinos which are produced at CERN, and aimed towards Gran Sasso 700kms away. The idea is to try and find mu neutrinos that "oscillated" and changed into tau neutrinos. This can be expected because neutrinos appear to have a small mass. (For the physicists of you, this is a consequence of the fact that the "flavor" eigenstates are not the mass eigenstates - this is akin to two pendula coupled with a very week spring, as a consequence, if one perturbs one pendulum, eventually the oscillation passes to the other pendulum and back). Anyway, they have thus far detected one(!) such event (see http://arxiv.org/abs/1006.1623).

Besides measuring the neutrinos and their flavor (using strong magnets, to see how massive is the particle that they form [whether it is a muon or a tau particle, both of which are heavier brothers to the electron]), they also measure the timing of the events. This they can compare to the expected time it takes the neutrinos to travel between CERN at Geneva and Gran Sasso near l'Aquila. Under standard theory of special relativity, because the neutrinos are extremely relativistic, this time should be very nearly the time it takes light to cross this distance. However, they found that it took the neutrinos less time to cover it, 60 nanoseconds less (which is equivalent to cover 18 meters more). This implies, if the measurement is right, that the neutrinos have travelled faster than the speed of light. Is this correct?

The gut feeling I have when I hear something like that, is that there is something wrong in the experiment. The reason is that the speed of light is so deeply engrained in physics, that giving it up would require very convincing results. This result, on the other hand, is not. And why is it so?

To begin with, a good experiment to measure anything which is not "zero" (e.g., the difference of something from the speed speed of light, a non-vanishing mass) is to plan an experiment that gives a signal if the measured quantity does not vanish, and no signal if there is no difference. One classic example is the Michelson-Morley experiment. The set up was such that there would be no change in the diffraction fringes if there is no compressed aether, and a changing pattern if there is (all this, without having to accurately know the length of the arms in the experiment or their difference).

The second reason why my guts tell me that the measurement is not due to superluminal neutrinos is because (anti-)neutrinos at a lower energy (of several MeVs) were measured to have a speed which is very nearly that of the speed of light, at one part in a billion. This means that this superluminal effect so happens to kick in at the right energy for OPERA.

The third reason is that particles at this energy ballpark were already extensively measured. It would have been a difference story if there would have been a claim that cosmic rays at 1021eV are superluminal, because that is a regime which wasn't studied on Earth.

Bottom line, I find it hard to fathom that neutrinos are superluminal. But I don't have a good explanation for the measurements either (Frankly, I have other things to think about). So, what can the source be? Look at the list of possibilities summarized in Luboš Motl's blog, perhaps one of them is the reason. 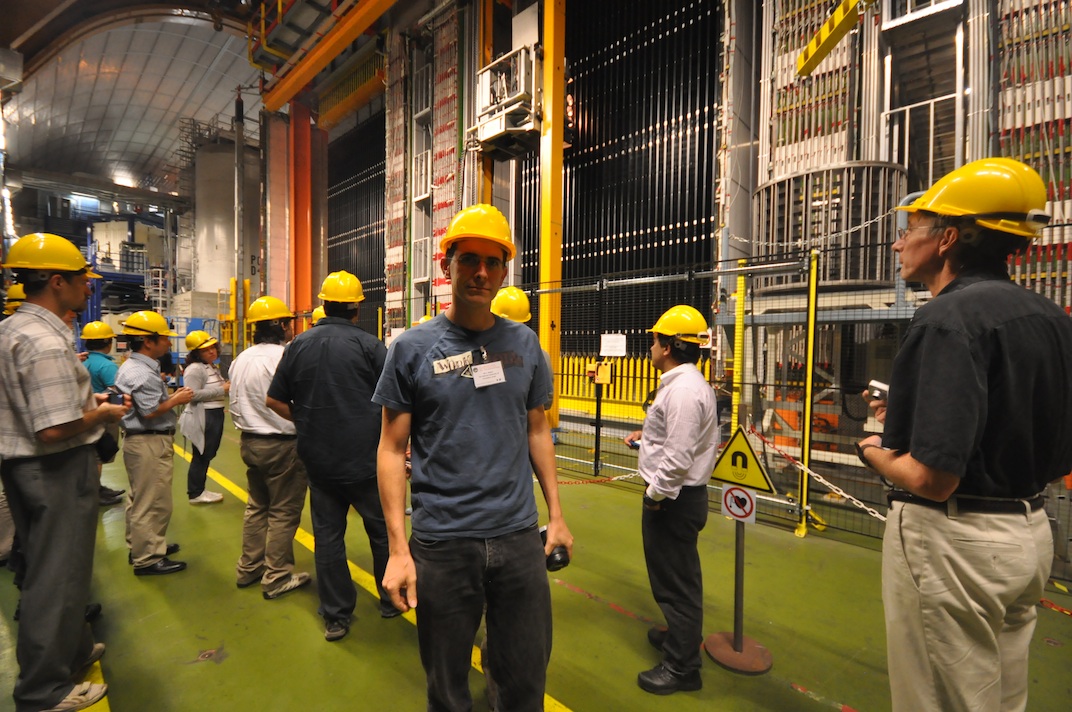 The author standing in front of the best OPERA in town, 1400m below the surface, in the Gran Sasso Laboratory

Let me end with the first super-luminal neutrino joke I have heard:
"We don't allow faster than light neutrinos in here" said the bartender. A neutrino walks into a bar.