The fine art of fitting elephants

The fine art of fitting elephants

By shaviv 18 Comments
A few weeks ago, while debating the issue of global warming with an alarmist (who thinks melting Greenland within 100 years is a reasonable possibility), my colleague pointed out two facts which appear to be consistent with the "standard" anthropogenic scenario, but not the one I advocate, that the natural climate drivers are large and that Earth's climate sensitivity is small.

First, he noted that climatologists can nicely fit the temperature increase over the 20th century with their usual suspects: Anthropogenic drivers as well as the mundane natural forcings (solar irradiance and volcanic aerosols). Second, he pointed out that climatologists do a good job in fitting the observed climatic response to Pinatubo and other volcanoes, such that the climate models cannot be significantly off in their sensitivity, as I believe is the case (for good reasons).

Although I knew for quite a while why the first point is meaningless, I must confess that I was a little bothered with the second point. Alas, it was in vain. It turns out that both points raised are fine exemplars for how IPCC science is plain bad.

The first point raised is rather simple to address. The fact that GCMs can fit the temperature increase is totally meaningless. Why? Because the allowed parameter space is so large climatologists could fit anything from a small temperature decrease (as was claimed in the 70's, before the imminent ice-age) to double or triple the observed 20th century increase. This means that a good fit cannot be used to significantly strengthen the claim that the anthropogenic theory is necessarily correct, as is often claimed. This is especially the case when considering that there is another climate driver which increased over the 20th century.

Specifically, the total temperature increase over the 20th century can be predicted to be the net radiative forcing times the climate sensitivity times the finite response efficiency over the several decade time scale (because it takes time to reach the equilibrium response, that is, we don't see all the change associated with the forcings radiation imbalance unless we wait long enough).

If you multiply the three numbers (and add the errors in quadrature, assuming the errors are independent), you find that a priori, without observations to compare with, climatologists should have predicted a human induced warming of about 0.7±0.5°C. Fig. 1 reveals the meaning of this number, and why fitting the observed warming is totally meaningless. Any monotonic, or a nearly monotonic temperature behavior could have been fitted equally well. 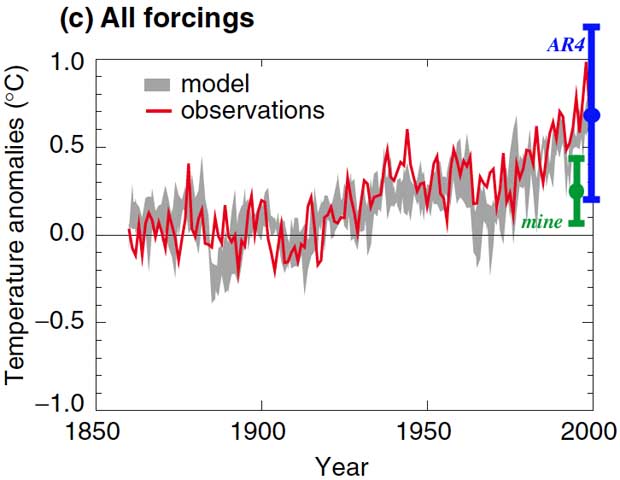 Figure 1: Models can fit 20th century warming. This is seen is this graph taken from the IPCC-TAR where the gray region depicts different model results and the red line the actual surface temperature measurements (there is a similar IPCC AR4 graph, but it commences in 1900, thus covering up a clear embarrassment for high sensitivity models, as I describe below). The blue error bar is the estimate for how much warming one would guess using AR4 values for the net radiative forcing and the climate sensitivity. Clearly, almost any observed warming, from 0.2 to 1.2°C, would have been comfortably explainable as anthropogenic warming. Thus, the "fit" bares no real significance on the validity of the anthropogenic assumption. The green error bar is the estimate I find using the IPCC AR4 net radiative forcing but with my best estimate for the climate sensitivity (ΔTx2 = 1 to 1.5°C), based on how earth actually behaved, as opposed to how it behaves in numerical simulations. The green error bar cannot explain the whole warming because the IPCC AR4 is missing a large natural radiative forcing, that associated with the solar → cosmic ray → link.

A quote attributed John von Neumann (at least so it was told by Enrico Fermi to Freeman Dyson) sums up the first part of the story: “Give me four parameters, and I can fit an elephant. Give me five, and I can wiggle its trunk".”

Here the elephant is very simple (an almost monotonically increasing function), so with just two parameters (the climate sensitivity and the total aerosol forcing), it is easy to fit this elephant. Nonetheless, given that there are only 2 parameters, it is not surprising that the fit is not so great when looking at the fine details. In fact, it has distinct clues which tell us that the sensitivity is lower than the range advocated by the IPCC. I'll get to that later below.

I must admit that at first glance, the paper pointed out by my alarmist colleague looked convincing, which made me quite puzzled. After looking at their data, and then at the whole data, I realized that the authors simply went astray.

The paper I'm talking about is Soden et al. 2002. If their result is to be summed up by one graph, it is that in fig. 2. As you can see, there is no room for a low sensitivity climate because their high sensitivity GCM nicely fits the observed temperature decrease. Or does it?

The whole MSU data, which Soden et al. used, appears in fig. 3. Can you spot in the figure the distinctive decrease in the temperature? That is to say, can you point to Pinatubo's temperature decrease without looking at the years? Clearly, the MSU temperature data has many variations of almost ±0.2°C. The only exception is the 1997/8 el Niño. 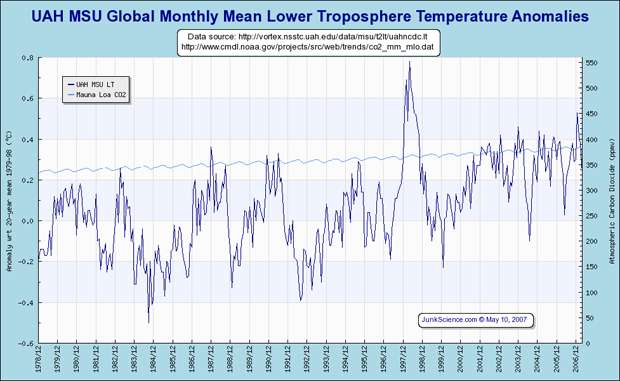 Figure 3: The MSU lower troposphere data taken from junkscience.com. Besides 1997's el Niño, there are many variations of order ±0.2°C.

If you couldn't spot see the "distinctive" temperature decrease following Pinatubo, let me help you. Fig. 4 has the MSU data of fig. 3, together with Soden's et al. figure placed on it. Doesn't it look strange?? The baseline temperature that the authors took is 0.2°C higher than the real average temperature over the relevant period. If the baseline was really where Soden et al. assumed it is, then the similar 0.3-0.4°C drops in 1981, 1983, 1988, 1996 and 2004 should too be attributable to similar decreases in the radiative balance. Of course, this is not the case. These drops are simply variations which arise without large external variations to the energy budget, they are part of the internal climate variations. (Note that the large drop in 1981 took place a few months before El Chichón's eruption).

Given that the temperature in the year following the eruption was 0.2 deg below the few year average preceding it, and given that the natural fluctuations are about ±0.2°C, all that can be said is that Pinatubo caused a 0.2±0.2°C cooling. Drawing the graph in figure 2 is simply misleading (to say the least). 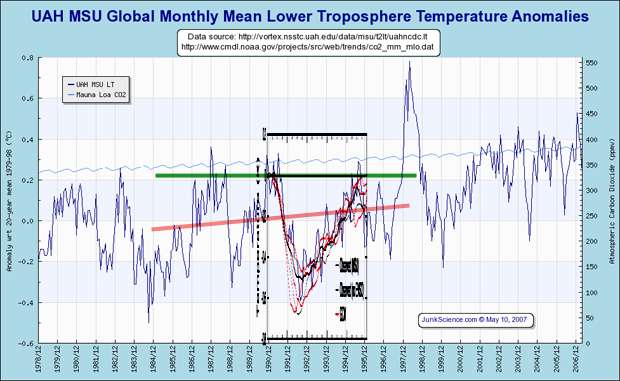 Figure 4: MSU data with the Soden et al. graph overlaid on it. One can clearly see that they took a baseline temperature which is 0.2°C higher than the real average. Taking a realistic baseline, the Pinatubo cooling is only 0.2±0.2°C. The smaller cooling implies a lower climatic sensitivity.

Moreover, if you open the IPCC-AR4 report, you'll be able to find the graph depicted here as fig. 5. It compares reanalysis data for the tropospheric height to model results. Here the fluctuations are relatively smaller, and one can clearly see that the GCM response to Pinatubo and El Chichón is much larger than the real response. Clearly, Global Climate Models over estimate the climate sensitivity.

Figure 5: The Modeled and observed tropospheric height, from the IPCC-AR4 report. The blue and red lines are results of numerical simulations while the black is observations (through the reanalysis data). One can clearly see that the model predictions for the decreases following El Chichón and Pinatubo are much larger than those observed. Over Agung, there is a large observed drop, but it is not nearly as sharp as the predictions, hinting that the decrease may very well be unrelated to the volcanic eruption.


What about other volcanoes?

Well, if you look again at fig. 1 (shown again as fig.6 with my pointers), you'll see that there are consistently large discrepancies between the observed temperature and the fitted one using GCMs. For example, when GCMs are used to best fit the 20th century warming, they give a global temperature drop of about 0.4-0.5°C during the great eruption of Krakatoa. In real life, the eruption barely tickled the climate system, with a response not larger than 0.1-0.2°C. The story repeats itself with Agung's eruption in 1963 and el Chichon in 1982. If you look at the real temperature, you could not have guessed that there were any volcanic eruptions. It is only when one looks at the average of 6 major volcanic eruptions that one can discern a temperature decrease, as is apparent in fig. 7. 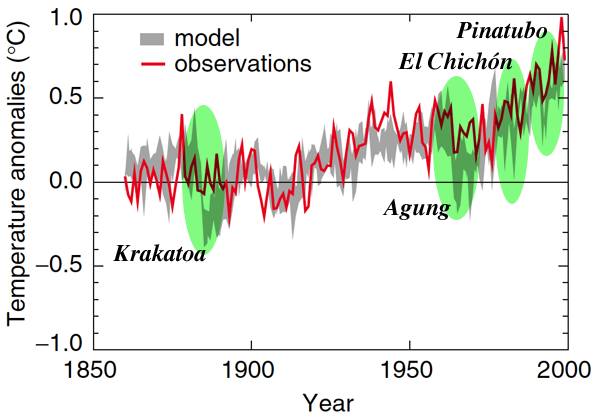 Figure 6: fig. 1 redrawn with pointers to the major volcanic eruptions (models in gray, observed surface temperature in red). Evidently, global circulation models predict temperature decreases which are much larger than those observed. Why? Because GCM climate sensitivity is too large.

Figure 7: The globally averaged surface temperature in the few years preceding and following a major volcanic eruption, taken from Robock and Mau (1995). The volcanos are Krakatau, Santa Maria, Katmai, Agung, el Chichon and Pinatubo. Apparently, the global temperature decrease following these major eruptions is very modest, just over 0.1°C, and barely overcoming the natural climate variations.
The requirement of a small climate sensitivity is apparent also in fig. 8, which summarizes the results of a global energy budget model having different climate sensitivities. From the figure, it is apparent that climate sensitivities of ΔTx2 ~ 1°C or less are required to explain the meagre temperature decreases following the major volcanic eruptions. A sensitivity of ΔTx2 ~ 3°C or anything more is simply out of the question. 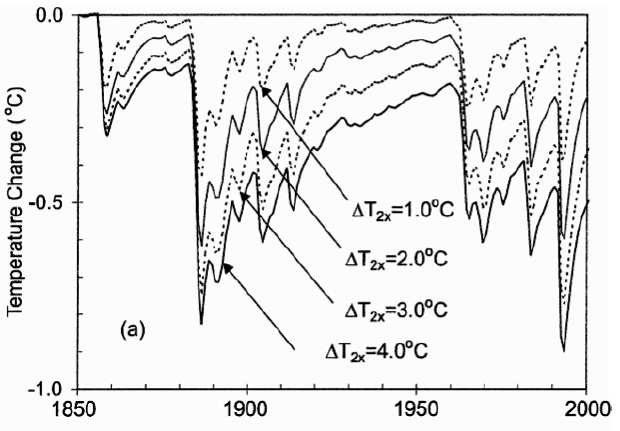 Figure 8: Harvey and Kaufmann used a global energy budget model with a variable climate sensitivity to assess which sensitivity best fits the observed temperature decrease following major volcanic eruptions. As can be seen from their graph, IPCC type climate sensitivities of ΔTx2 ~ 2°C to 4°C give unrealistically high temperature decreases. For example, ΔTx2 ~ 3°C gives a typical 0.5°C decrease following Krakatau's eruption. This is consistent with the typical GCM results portrayed in fig. 6, but much larger than the actual global temperature response (seen in fig. 7).

Incidentally, I am certainly not the first to note that volcanoes barely tickle the Earth's climate system, thus implying that Earth's climate sensitivity has to be on the low side. Prof. Richard Lindzen of MIT has pointed it out already quite some time ago, as did others.

To conclude, GCMs cannot properly fit the observed 20th temperature increase. Even if one uses the large leeway allowed because of the uncertainty in the sensitivity and the effects of the aerosols, the fact that volcanic eruptions stand out as inconsistencies in the fit is a vivid clue that climate sensitivity is much lower than the range advocated by the IPCC.