In a supernova explosion, the envelope of a star (whether a massive star or a white dwarf) is blown away. Because it takes a long time for the thermal energy of the explosion to diffuse, instead of diffusing out and shining brightly, the thermal energy is all used to accelerate the shell. By the time the thermal radiation can actually be radiated, it is already gone and residing as kinetic energy. Without any other process, supernova would have been dim objects. But they are not.

Usually, the thermal energy used to illuminate supernovae comes from the radioactive decay of Nickel 56 and Cobalt 56 formed in the explosion itself. The radioactive decay heats the fast moving shell on a time scale of days to months, this energy then diffuses out and radiated away. That’s why the light curve of many supernovae can be described by a rise (due to the expanding shell being progressively more transparent) and then the exponential decrease associated with the radioactive decay of Nickel-56 (with a half life of 6 days) and Cobalt-56 (with a half life of 77 days).

However, in a subset of supernovae called Type IIn, some if not most of the thermal energy used to make the supernova shine originates from the supernova shell shocking circumstellar material, i.e., matter which was previously ejected by the progenitor star. Because the kinetic energy in the shell is much larger than the energy liberated in the radioactive decay of the Nickel and Cobalt, Type IIn supernova can therefore be very bright (depending on how much circumstellar matter there is to stop the shell).

This however raises the question, how did the circumstellar material get there to begin with? The typical amounts inferred from bright Type IIn lightcurves (and X-ray emission) can be several hundredths to several tens of solar mass. This cannot be explained by a “normal” wind of a massive star because those typically lose at least a hundred times less mass over the relevant time frame. This leaves two options.

The first one is that the circumstellar matter could have been the result of a pre-supernova explosion. Although this cannot be categorically ruled out, it doesn't seem to work in several cases. For example, you would tend to get a broader range of “narrow lines” which have the typical P-Cygni spectral shape expected from a wind. This is because an explosion tends to produce a range of velocities while a wind had a much narrower distribution. In an explosion you would tend to see the SN envelope progressively shock faster moving material, but you generally don't.

One of the interesting aspects of the super-Eddington state, however, is that it does accelerate a wind, one whose mass loss is predictable (see Shaviv, 2002). This mass loss is significant enough to explain the large amounts of circumstellar material found in the vicinity of the exploding supernova.

Another interesting piece of information suggesting that the circumstellar material is driven off in a super-Eddington eruption preceding the supernova is SN2006jc. This is a very interesting type Ibn supernova (i.e., similar to a Type IIn supernova except that there was no hydrogen in the envelope) because Koichi Itagaki, a Japanese amateur astronomer, detected this object to have a super-Eddington LBV-like eruption a full 2 years before the SN explosion itself! Moreover, if one uses the mass loss luminosity relation I derived some 10 years ago (in Shaviv 2002),  the mass that is predicted to have been ejected during the LBV-like episode is consistent with the circumstellar mass with which the SN shell appears to have interacted with (e.g., see modeling of Chugai 2009).

So, back in May, Eran Ofek who is an observer at the Weizmann Institute visited the Hebrew University. While we were conversing in my office, I told him about this prediction, which got him interested. Since he is involved in the Palomar Transient Factory (PTF) project, he is in a position to look for such super-Eddington progenitors. This is because the PTF continuously monitors and records fixed regions in the sky. This means that when a supernova is detected at some direction, the same patch of the sky can be studied at previous epochs. In a sense, the PTF allows making a prediction backwards in time.

The Light curve of this supernova with its unprecedented super-Eddington eruption is: 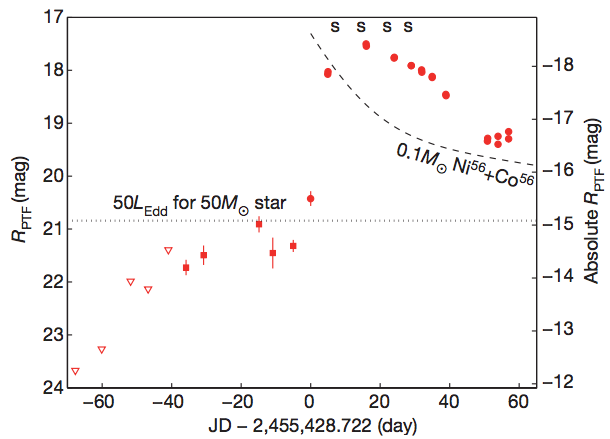 Together with the spectrum (see the paper for the details), the following picture can be reconstructed:

(pre-a) A super-Eddington eruption takes place over 40 days. During this time, it ejects a few 0.01 Msun of material moving at 2000 km/sec. In addition, there is evidence of slowly moving material which was ejected at least several years before all the action takes place.

(a) By the time the supernova explodes, the ejected material reaches 7 x 1014 cm.

(b) SN2010mc on day five. The fast moving supernova shock front (in grey) ionizes the inner and outer shells along the way, producing the broad and narrow hydrogen emission lines (from the 2000 km/s and 100 km/s outflows).

(c) The object at day 20, when the SN shock overruns the wind emitted in the super-Eddington phase. From this point, only the narrow hydrogen emission line is observed.

This discovery of course made me very happy. However, it didn't make me as happy as it would make me later!

The supernova light curve can be used in various ways to estimate the amount of matter present in the circumstellar material (CSM). These estimates constraint the amount present to be between 0.01 and 0.03 Msun.

The mass-loss - Luminosity relation I derived in 2002 can also be used to predict the amount of CSM that should have been ejected in the super-Eddington episode. It turns out to be around 0.05 Msun give or take a factor of 2. In other words, not only could I make a prediction which Eran Ofek discovered and confirmed, my 2002 results also consistently predict the amount of mass that should have been ejected during the super-Eddington episode, just before its spectacular death. Of course, it does open a very interesting question, which is why did the star become so luminous to begin with. To this I don't have a good answer. But that's what so beautiful in science, by answering one question you always open a few more interesting ones! In this case, the answers will probably have interesting ramifications to the very last stages of stellar evolution.