The Occultation of Venus

The Occultation of Venus

By shaviv 1 Comment
Blog topic:
astronomy
Two weeks ago, there was a lunar occultation of venus. I wasn't really prepared. I only learned about it when my colleague Prof. Avishai Dekel phoned me perhaps an hour before the event. He was driving west and saw the impressive sight of the two bright objects near each other.

Since my personal 8" Celestron telescope was out of order (it lost its collimation), I used its 10x50 view finder instead (and took a picture using a DV camcorder held by hand next to the view finder's eyepiece). Here is what I caught. 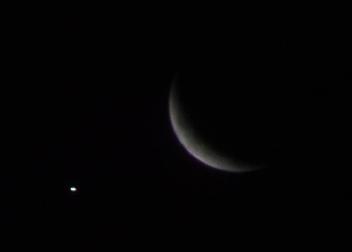 The moon through a 10x50 viewfinder.

Interestingly, It is not the first time that the view finder proved useful. The previous time was during the venus transit.

A day later, I received a nice picture taken by Lev Tulenkov. He took it using a small telescope at the Hebrew university's Belmonte Science Center for the Youth . 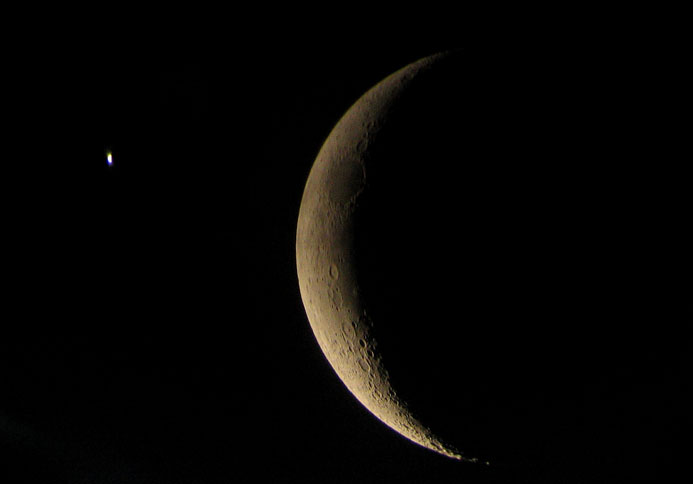 Venus and the Moon, just after Occultation. © Lev Tulenkov, used with permission.

One trivial point evident in the second picture is that venus itself is also a crescent. But there is also a second, less trivial point. Although venus is further away than the moon (by roughly 2 orders of magnitude), its surface brightness (i.e., the RGB level of the pixels...) is larger than that of the moon. This arises from three facts. First, the angular surface brightness is conserved irrespective of the distance to the object. If, for example, the moon would have been twice as far, the flux we would have received from a unit angular area would have been the same. It is the total flux which would have been reduced because the total angular surface area would have decreased by a factor of 4 (= 2 squared).

Thus, the fact that that the intrinsic surface brightness of venus is larger than that of the moon has nothing to do with the fact that venus is further away. Instead, it arises from the combination of two different physical effects. First, venus is closer to the sun. Thus, if you were to hold a white piece of paper while hovering above venus, the paper would appear brighter than if you were to hold the same paper while on the moon. The second reason is that venus is whiter than the moon. Namely, it reflects about 65% of the light shining on it (like snow) whereas the moon reflects only 12% (the moon is as dark as wet soil!).

Incidentally, when I first visited the Belmonte Science Center, to attend some meeting, I was shown their telescope collection. When pointed out to the different telescopes they own, I was surprised by one. I knew there are several types of telescopes (e.g., Newtonian, Maksutov, or Schmit-Cassegrain, as I have), but I never heard of an Einstein type. So when I asked what kind of telescope was an "Einstein telescope", I was told that it is not an "Einsteinian telescope", but instead it is simply Einstein's telescope...

Anyway, the occultation coupled with a promise I gave my son, triggered my need to collimate the telescope. For about a decade, it stood still in humid Haifa while I was doing other stuff. Once I moved to the much drier Jerusalem, I reunited with my telescope and saw the need to clean the mold(!) which developed over its primary mirror. (During summer nights, Haifa's neighborhoods on Mt. Carmel stay close to the dew point, molds love that!). Unfortunately, the cleaning required dismantling the corrective lens, which when reassembled took the telescope out of collimation. At the time (4 yrs ago), I looked for instructions on the web, but could find none. This time, I found that Celestron now placed all its manuals online. The secret I just found out was that the orange plastic over the secondary mirror (embedded inside the corrective lens) is actually a cap, behind which are three little collimation screws. With the collimated telescope, my son could easily see jupiter with several of its cloud bands, and of course the 4 Galilean satellites. That was about a week ago.

Yesterday, I past next to my telescope. Now that it is collimated again, I was tempted to use it, but was too lazy to take it out to the balcony (actually, too busy would be a better description). So, instead of moving it out, I simply pointed it to the two objects I could see through the window—venus and saturn setting on the western horizon.

The seeing was horrible. Partially because I was in the wind coming through the window, and partially because of the hot air rising after a scorching day (we had a week long heat wave, which just ended ;-) ).

Nonetheless, venus did show a very nice crescent, and Saturn's rings where of course evident. On the spot, I also decided to connect my iSight to see whether I can actually record it. My rudimentary iSight mount consisted of a rubber eye guard. MacGyver would have been proud of me.

Here's a small sample of the movie I got out of it.