Lightning Strikes without a storm!

Lightning Strikes without a storm!

By shaviv 1 Comment
Blog topic:
weather & climate
A few months ago, I attended a space-day event at the Presidents' residence (presidence hereafter ;-) ). Nope, not the American one, the Israeli one. In Israel, the president is like the queen in the U.K., only less so.

Anyway, the event was rather interesting because of several aspects.

First, it was my first time there. I almost visited the place as a soldier. I had strong recommendations for a good citation (at least so I was told), but a hair-cut (the lack of one actually) and missing rank insignia, ended with a minor court martial and no chance of visiting the presidence.

Second, I got a chance to hear Cmd. Eileen Collins from up close. I was really positively surprised. I would have imagined that the first woman space shuttle commander would be more, well, blunt, forceful, with elbows, you name it, but the impression was exactly the opposite, of a really nice and modest person. Interestingly, she said that when seeing Israel from above she always thought to herself how fascinating it would be to visit the place... which I thought to myself to be rather odd... since most people would wish the opposite, to fly in the shuttle! Incidentally, from looking up her bio, it appears that she was born some 30 miles from where I was. What do you know, a small world.

The afternoon included several lectures, on topics ranging from cosmology down to earth. All of the talks were aimed for laymen, such as the president (who incidentally asked a few good questions). So nothing exciting there (at least not for me). But the last talk was in fact the last interesting aspect of the evening, which I wanted to share with you.

The talk was given by Dr. Yoav Yair from the open university. He talked about the MEIDEX (Mediterranean Israeli Dust Experiment) sent on board the Columbia space shuttle on its last and unfortunate mission. The camera was operated by Ilan Ramon, Israel's first astronaut. The main goal of the experiment was to study dust storms and how they affect the radiative properties of the atmosphere. The idea was to compare simultaneous airborne and spaceborne measurements, i.e., collect data both from above and within the atmosphere. The most interesting data in this respect, was collected on the last day. Unfortunately, though, that data was not transmitted down before the unfortunate reentry. 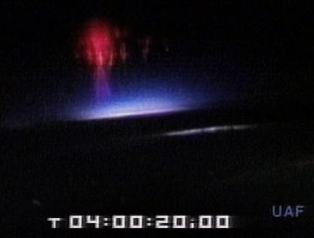 Red sprites - discharges to the ionosphere.
(from wikimedia commons) 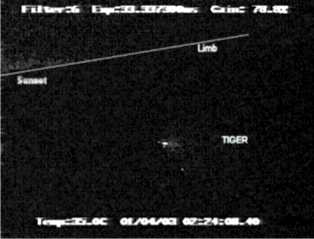 The Transient Ionospheric Glow Emission in Red (TIGER), taken by the Columbia space shuttle crew in 2003 (Credit: MEIDEX Science team/ISA/NASA)
Little was I aware, though, that the camera was also used to study sprites, devils, elves and other interesting electric phenomena. Basically, these are thunderstorm lightning discharges. However, unlike normal lightning, they don't take place between clouds and earth or between clouds and clouds, instead, they are discharges to the ionosphere. Because the air density is low, the ions produced by the discharges can diffuse out without recombining, so instead of sharp bolts, the lightnings are diffuse, and come in different colors, not unlike auroras.

These lightnings were studied and photographed by the Columbia crew. The really interesting stuff is a bizarre event photographed by Ilan Ramon. He observed strange lightning like flashes over the ocean near Madagascar. So he photographed the lights. These images were transmitted to the ground and later analyzed.

When the MEIDEX scientific team analyzed the data, they realized one very strange point right at the beginning.... there was no thunderstorm activity anywhere nearby! Lightnings without a storm! How come?

(1) Possibly a meteor, though not likely, because these usually leave longer streaks and are brighter.

(2) At the time the event occurred, a thunderstorm was raging in the Eastern Mediterranean. Interestingly, it is at the opposite footprint of the magnetic field lines which reach the Indian ocean south west of Madagascar. Namely, a thunderstorm near Cyprus accelerated electrons which propagated along the Earth's magnetic field and hit the Earth's atmosphere a sixth of the world away, causing it to glow under clear skies. There was even a lightning event which took place exactly at the same time (within the measurement error of about a second). The catch, it doesn't appear to have been strong enough to have been able to accelerate the electrons, moreover, it is not exactly at the other end of the magnetic field line of the TIGER event. The opposite would be a little northwards, around eastern turkey, where there is actually no good lightning tracking stations. How inconvenient.

(3) Something altogether different. A new type of atmospheric phenomenon unrelated to storms.

Personally I find the second explanation the nicest. It would be a terrestrial self made aurora, albeit a very short one. In any case, I find it strange that I did learn of new science at a rather odd place for it... at the presidence.