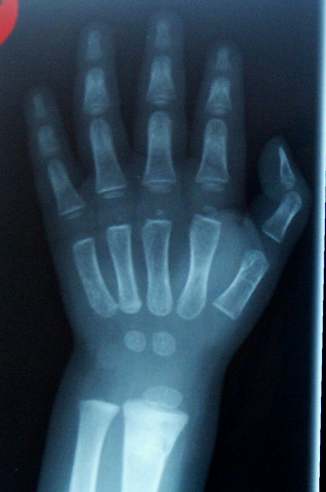 X-ray of the hand of my 2yr 8mo old child. A healed fracture can be seen on the bottom right. The bone age (which is between 2.5 and 3) can be determined by the appearance of epiphyses in the phalanges (finger bones), and also the appearance of bones in the palm of the hand.
My almost 3 year old son is a daredevil, and as one, he already has a free pass to the emergency room.

His last escapade was jumping from the second level of a double decked bed in Mt. Meron field school. Unfortunately, his landing wasn't something to be proud of.

A month later, I took him to a clinic to take his cast off. Of course, they had to take an x-ray to ensure that the broken bone healed as it should, which it did. The x-ray though, which you can see on the right, made me curious. Is my son developing as he should? Of course, it is solely a question to satisfy my scientific curiosity. Being a second child, we don't worry much given that he looks rather average. I knew he was, but I wanted to see whether I can recover his bone age.

So, armed with the x-ray, I started googling, only to find that the good references (in particular, the Greulich and Pyle atlas) are not online! Anyway, to make a long story short, I did find some info in a real library from which I could determine his bone age.

For a toddler+ kid, it turns out that a good age indicator is the appearance of epiphyses, the disk like structures at the end of the phalanges, which are the finger bones. Of course, quite unsurprisingly, the bone age of my kid fits his actual age (between 2.5 and 3 vs. 2 and 8 months). What the bone age does not reveal is that this kid is extra happy (actually, the fracture hints in that direction ;-) )

Anyway, I found his x-rayed hand rather cute, don't you?